Home Page of Travelogues
We welcome comments. Please send them to Stephen and Dawn

I didn't take a lot of pics this time because we didn't bring the good camera (just the cellphone cam), and we have SO many pictures from all over France & are starting to wonder how to archive everything especialy since we now have so many family pics as well, with grandkids and all.
Dawn We had a great time. We could not write on the phones. Writing a paragraph requires a speed that neither of us has on our smart phones. We talked about what we were going to write and now we are going to do it.
Stephen

We flew Air France on a late schedule, flying out of Logan at 10:30 or so and changing in Paris for a plane to Bordeaux and then a bus to Place Victoire and finally a short walk to our B&B. We only have the one picture of Dawn in the bathroom so you might go to http://www.bordeauxchambresdhotes.com/la-villa to see how lovely the place was. 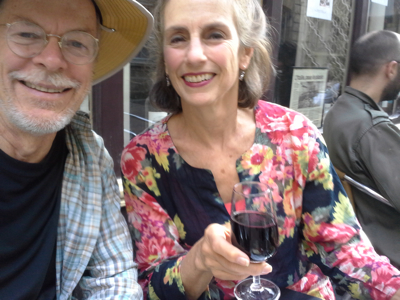 Over coffee on the deck, Sylvain gave us the tourist pep talk with a map and we were off. We wandered through the student section centered around Place Victoire and made our way to transportation headquarters where we got senior passes for a week on the bus and tram system. They even had our pictures on them! Under $20 for the both of us. We found Le Wine Bar easily and settled in on the sidewalk and decompressed from the long travel day. See photo. 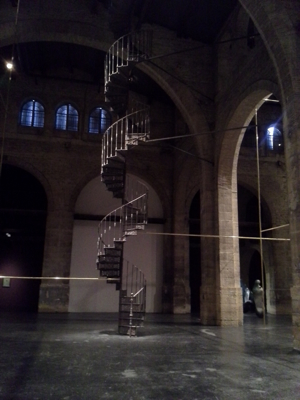 Bordeaux is a beautiful city. Combining its Medieval pedestrian quarter with its upscale shopping and Museums. We mostly walked, starting with the Botanical Gardens on the other side of the river and then visiting the various churches that we could see from that vantage point. Lunch time found us at a hole in the wall place on a narrow street with two tables outside. A selection of small portions of quiches and things along with a glass of wine was the perfect thing. Ask Dawn about her conversation with the other table about New York "Cheese Steak".

Stephen it's a beautiful old city, smaller than Paris, easy to get around. We stayed in a lovely B&B in a kinda funky 'hood. Sylvain made fabulous breakfasts! We went to a great exhibit in the fabulous space of the Contemporary Art Museum there.

Staying with the family

July 12 - July 13
We made the reservation in Bergerac for two nights, because we thought we were going to Plum Village on the Sunday at the end of our stay with Adam, but we went for the morning of the 11th instead, because the schedule changed and there was no public visiting day on Sunday. Plum Village was a wonderful experience. Thich Naht Hahn, instead of giving a dharma talk, took questions from the children in the audience. Their questions about family and divorce had both of us in tears. Later he lead a walking meditation. We bought a drawing to help support the orphanage in Vietnam. It says in French, Listen with Compassion.

While we were in the Chateau Montbazillac we got a call from Isabelle that they would be delayed a day coming down to Cezac. There had been a commuter rail accident in a train station that we had heard about on the TV at our place in Bergerac. It had disrupted all the traffic going south from Paris, so we picked this town because Adam had talked so highly of it although it was a little too far from our moulin to take a day trip to. We stayed at:

http://www.booking.com/hotel/fr/chambres-d-ha-tes-a-clair-de-lune.en.html and it was another wonderful B&B.

We walked into town for a nightcap and watched the Bastille Day fireworks over our friend Susan's favorite hotel in this town.

Then on to Le Lot 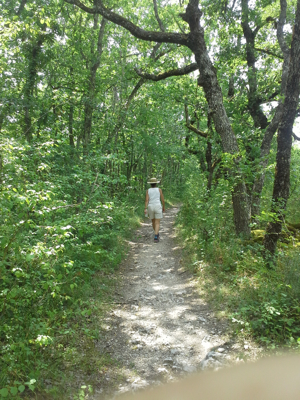 Then onto Le Lot to stay with our old friends, the Maheus, in their old stone farm house in Cézac. They are both now over 80. One of their daughters was there and for a couple of days their 18 year old grandson from NYC. We pitched in a lot with shopping, cooking, dishes, yard work, etc....it was kind of like just being in someone else's family. Of course Isabelle cooked a lot of wonderful meals, and we had the fabulous local goat cheese, Cabecou. It is work for me because although my French is good, and I can speak well enough, understanding everything that they say is a challenge. It was still great to be there again, and be there with them.

We did one nice hike here, on part of the Compostelle trail, and took advantage of their pool. It was still very hot there.

Dawn We had done this hike before at part of a longer hike to Montcuq but that was 1997. We stopped at the same borie and the same chapel, This time noticing it was the chapel of St. Jean.

Stephen We had a meal out in a lovely country farm/restaurant with the Maheus and Sophie. http://www.canabal.fr/

Inside this very calm, rural place was a bordello like theater where they put on costume heavy theatrical events.

I actually managed to do some yoga on the lawn behind le Baralou, the Maheu's house, not so level, but it helped my balance to deal with unlevel turf and looking at the sky instead of a wall! It was just the sky, the lavender, a butterfly, the bees and me!

We headed into Cahors and after going to the market and finding a cafe with free wifi to check our email we headed for the Musee Henri Martin to see his paintings along with a couple of contemporary artists. The Museum has a reasonable charge of one and half euros per person and when Dawn handed over a five euro bill the woman explained that she didn't have the change and directed us to a bank to find change.

We were a little stunned.

We solved the problem by having two Ricards at a cafe after finding out that banks don't really give out change, but also seeing the woman in the same bank at a machine that would give her change for a 50 Euro bill. I guess she was feeling bad about sending us away. Fortified by the Ricards and a lot of water (it was very hot), we returned to the museum to be stunned again by the Henri Martin paintings. 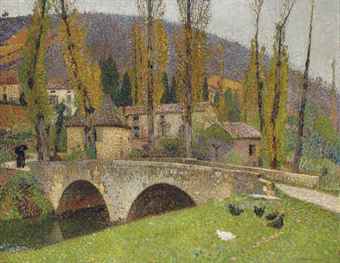 Above is a link to see some of them, and at left is one of a women walking in her village..

It is a painting of a bygone village. The buildings are still there and the road, but the place is gone, the calm is gone, the quiet is gone. What has replaced them is us, pretending not to be tourists, but in fact, touring around, looking for the past, but moving at the speed of the present. I am not seeing the big picture here. Much else intervened in the life of this village. Two World Wars and economics upheavals probably drained the life out of it and many other towns before we started driving around France.

More about restoration of Medieval villages at Sarlat.

There were 3 rooms of Henri's work and almost all of them demanded our attention. Self portraits, muses, seasons, monumental war monuments that were never installed. I am not an art critic, but he seemed to have the utmost control of the medium. Brush stroke, color palate and composition combined into a force that held you in front of his paintings.

We saw works of two other artists, one who threw out all of this kind of work and replaced them with uncontrolled energy. Most of the time we ask, "Do I like this painting?". Maybe we should ask, "Does this painting like me?"' For this artist, the answer was No. If they could have, they might have done me bodily harm. They were certainly big enough, and wild enough.

The other painter was from Poland and explored the emotional trials that the country has been through over the past decades. Most memorable were his couples who stood or sat quietly and motionlessly at a powerfully emotional moment in their lives. Most of the time, there were not good moments, and perhaps after we left the gallery, their lives would quietly move on.

One thing that Dawn and I have decided is that we should allow surprise into our lives. Perhaps a day can be rated by how many surprises are in it. This visit was one. A lively encounter with artists we had never heard of before. When you have a bad surprise, you can shrug it off as small payment for all the good ones.

It started with a flyer on the table and ended with a midnight supper. The 46th Quercy Blanc music festival. When we mentioned it, Jean and Isabelle knew nothing of it, so we called and discovered that it was a performance of 16th century french poetry with a lute. Somehow not my first choice but the die was cast and reservations were made. It will start at 9 PM and take place in the village church.

The poet is Clérmont Marot (1496-1542) who was born in Cahors and the performers were Jean-Claude Caron and Yves Nicolle.

There is a lot to take in when you don't know the language. First there is the physical language of what the actor is doing with his face and voice and body. Also the pacing of his delivery. The pauses were very helpful in allowing me to collect meaning from the few scraps of words that I recognized. There is also the audience. A small gathering in the town church, a town with less than 200 inhabitants. There reactions were palpable.

Then we actually got a tour of the house where Marot had lived in Cézac, now owned by a friend of the Maheus. A spectacular place that was pretty much in ruins when their friends bought it, and is now amazing. His 500 year old table in front of the fireplace was the most amazing thing,

Afterwards, we organized the trip home which included dropping me at the church to pick up our car to return the the house where Dawn, Julian and Sophie awaited a ride home.

Jean had not eaten dinner, so we joined him around the table for some food and then off to bed.

End of the Trip

We went to this town, Lalbenque, which was not very pretty and had a lunch that was not very good, but we did get some Euros at a ATM which took care of the rest of the trip which was quickly coming to a close. We don't always make the right choices. Isabelle was shocked that we did this when there are pretty towns with good restaurants all over the area. Looking back, I am too.

Our flight from Toulouse left at a reasonable hour and we made a good connection in Paris to arrive safely at Logan.