The rug arrived! I was standing in the living room the morning after we flew in and I saw a DHL van pull up in front of the house. By the time I got the door open he was coming up the stairs with a big box.  We gave Hilario a three day window to land the rug in our house and here it was a few hours into the slot. He never answered any emails that we sent him and we were worried a bit. 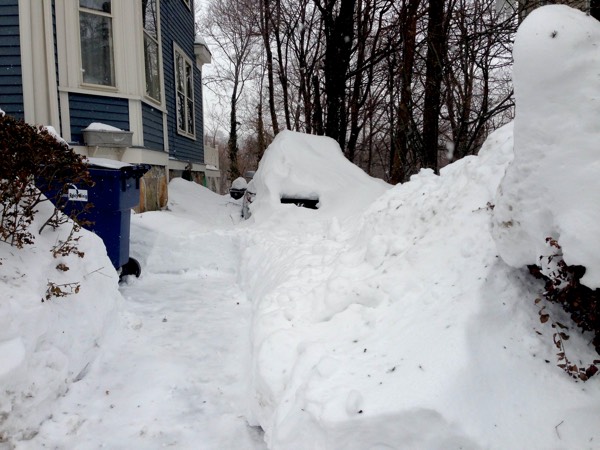 We took Olivier out to the Grotto for his birthday.  It turned out that everyone was at the closing party for the cheese store in the courtyard.  It is closing and its owners are retiring.  We didn't get any details about whether anyone will take it over. Joe came back and sat with us for a while. He and the family will be in Paris in April to celebrate a birthday. We will rendez-vous at that time.

We are unpacking and packing simultaneously.  I am not bringing as much video stuff to Paris. We would like to be down to two roller bags plus backpacks.

It is cold around here!  And after looking at my car (left) I decided not to dig it out.  Even if I could get it working, I am not sure there are many places to park.
(In all fairness, Olivier dug out the car much more than you see in this picture. However, the left side was still basically frozen into a snow bank, and there was nowhere to pile any more snow, even if he/we could have shoveled it; not to mention that the battery was disconnected and the car up on blocks! -Dawn)

Escaleras is up on Dawn's site.  We are also hoping that Julian will able to show that at a fund raiser for his foundation next month in San Miguel de Allende.

Peter, Richard, Laird and I got together for some beer at Assembly Row and then Peter drove me to Concord where we are hanging out with kids and grandkids.  I am taking advantage of the fast connectionhere to upload video.

Stephen
Susan, being the dear friend that she is, drove me around to get a prescription filled, buy food, buy shoes (always a major challenge for me), and then drove me all the way to Concord to see the girls.  It was a great way to have a visit, and she did me a great service.

Wow, I hadn't really seen Tess, Sydney, and Chloe since late July...seven months ago, because they left for a trip in early August, and I left for California Aug. 26. They are certainly growing up, as kids are meant to do!  Sydney came up with a cool idea, "Let's write up a bunch of interview questions and interview each other." I asked the same set of questions to each of them privately. They each made up their own questions to ask me.  It was really a great way to re-connect after a long absence and to find out what everyone was currently thinking about and feeling. I will certainly keep the Q&A's private, but I was touched that the one question that each of the three of them asked me was,"Did you miss me?"  Well, I sure did and hope we can do more FaceTime in these next three months.

Adam arrived home bout 7:30 p.m. Friday after a sixteen-hour return trip from Basel, for buiness. He was exhausted and also took Tess to an all-day Lacrosse tournament Saturday. He and Noelle had a little dinner out while we continued to stay with the girls so we slept over again Saturday night.  Early Sunday morning Adam drove us in his nice warm car to the commuter rail in Concord where we had a few minutes to catch up. He couldn't drive us home because he was taking Chloe to a ski lesson at Neshoba.  So commuter rail to North Station, to Orange Line to Forest Hills, and a cab to Cummins.

We are showered and packed, making sure we have all our devices and their chargers.  The party last night at Martha's was delightful.  This group of wonderful people is the very thing that we leave when we board these jet planes and what brings us back. It was like Christmas, people arriving in the falling snow with bags of food and wine with big smiles on their faces. We continued our transportation melange, taking the 34E bus out to Islington so that Jerry could pick us up after getting some firewood.  Judith and Pete took us home at the end. (Everyone wanted to get back home in time to watch the last episode of the current season of "Downton Abbey."  Since we hadn't been able to watch any of it up until now anyway, we abstained.-Dawn)

Thank you all for the chauffering that you did.  If we do something similar next year, I will definely arrange to have the car working when we arrive.

Home Page of All Travelogues
(top)