With Jamie and his Family

Dawn:
We took a fairly small plane from Phoenix to Denver with outdoor boarding and deplaning. Just as I told Stephen to hold on to his hat because it was very windy, mine blew off my head and landed near the nose of the airplane. A young man kindly retrieved it for me. 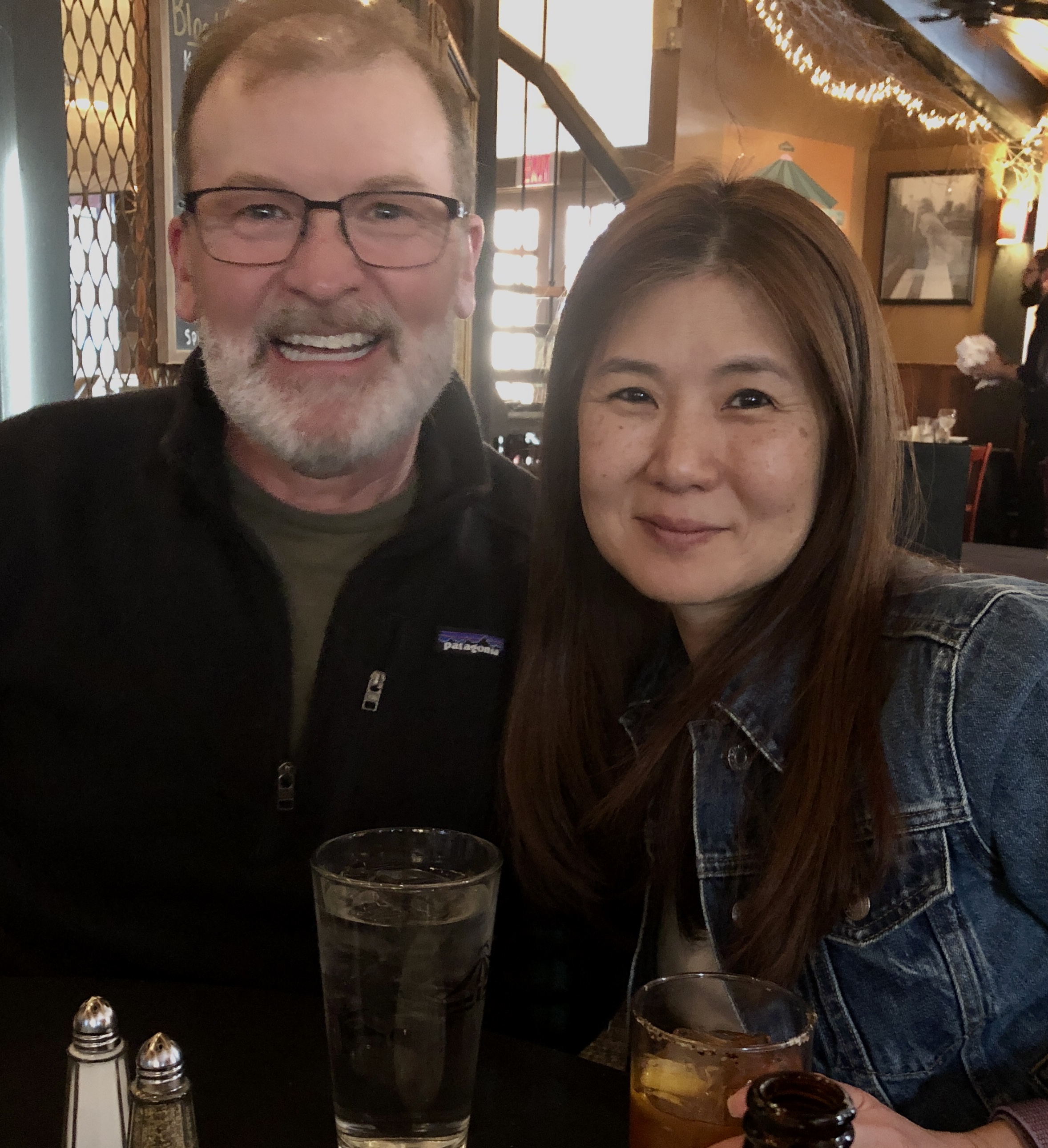 
Stephen's nephew Jamie and his wife Wendy completely spoiled us. Jamie had been a barrista, among many other jobs, so made fabulous coffee with steamed milk for us every morning. We ate out a couple of times, had great sushi takeout one night, grilled chicken takeout another, and delicious fresh spring rolls handmade by Wendy for our last night's dinner, not to mention gelato which we have not indulged in for a very long time!

Their daughter Piper will be twelve in a week. She attends a new arts magnet school and plays piano beautifully. Like our 13-year old East Coast Chloe, she is a huge Harry Potter fan. Not having seen Piper in five years, because of a covid-cancelled visit, she is now quite poised and grown up. It was fun to get to know her a bit more.

Kai is their 90 lb. rescue dog who looks like a pinto pony and is a sweetheart. He likes to lean into you with affection. This habit may have knocked Wendy and Piper over a couple of times because they are not very big! We enjoyed his presence. 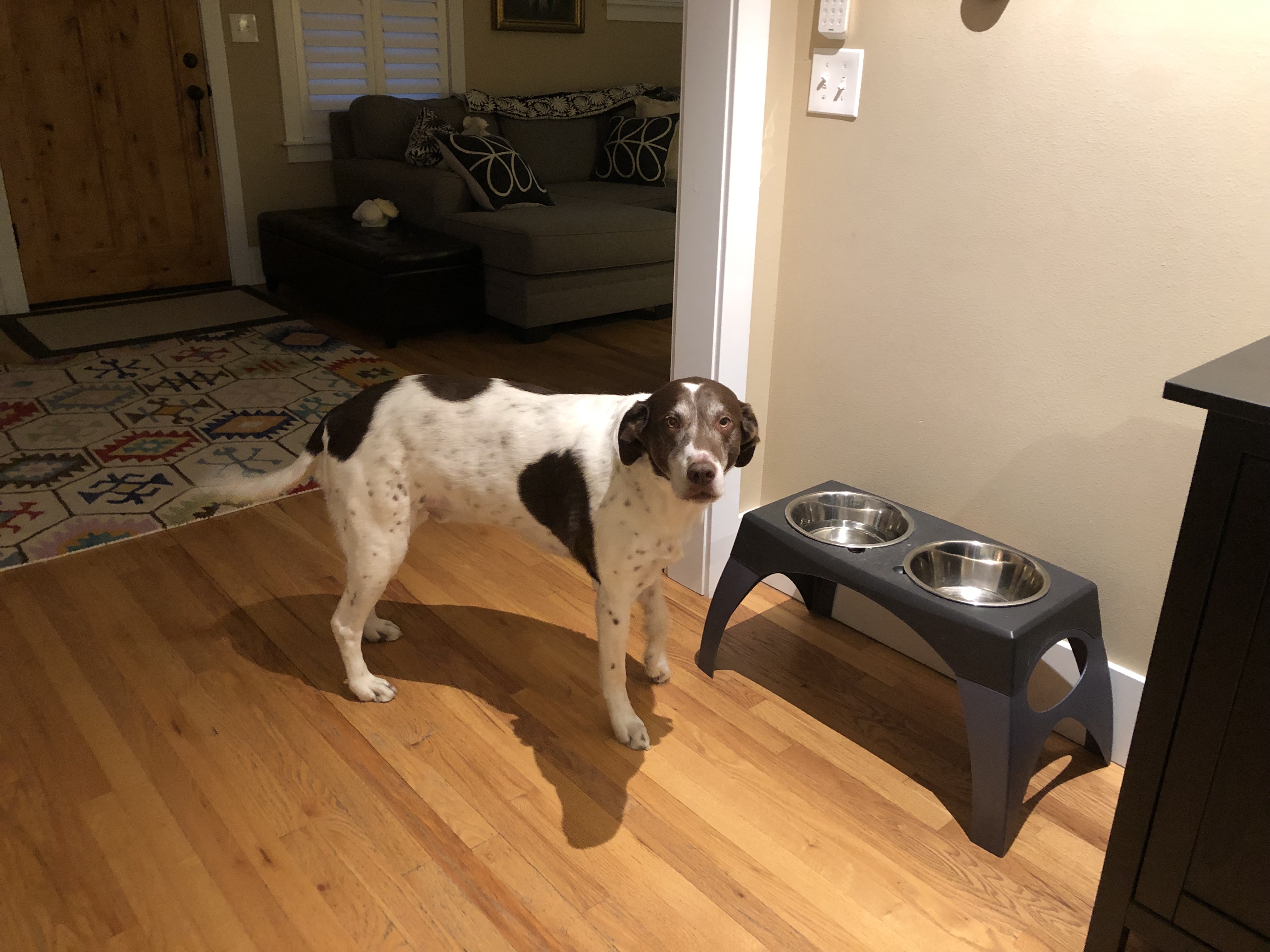 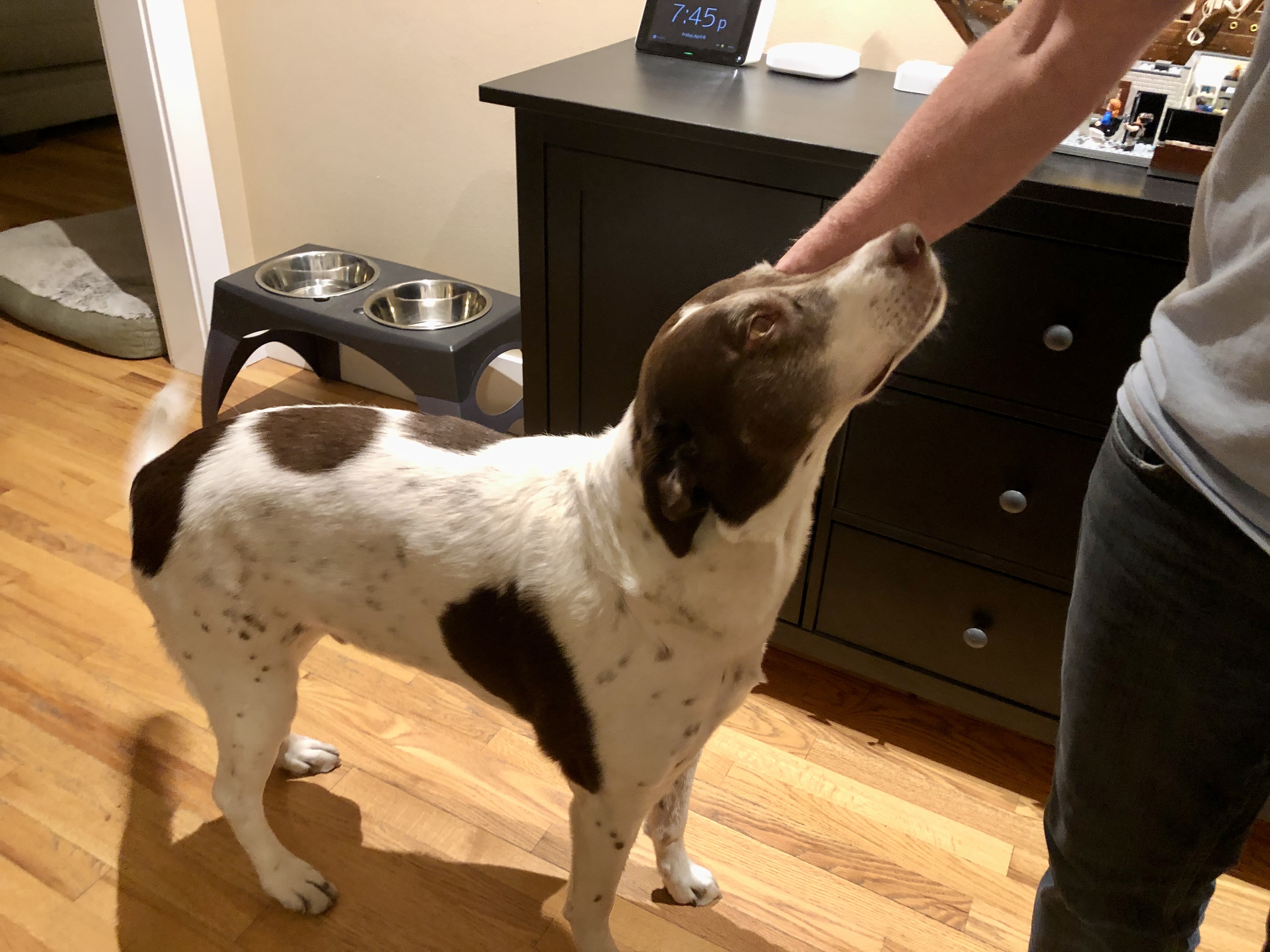 
Stephen:
The flight was easy. We arrived nearly simultaneously with Jamie near the baggage carousels. We grabbed dinner the first night at a Mexican restaurant, Billies. The tacos were surprisingly good. It was a neighborhood place and even early on a Thursday evening was a boisterous, convivial place. 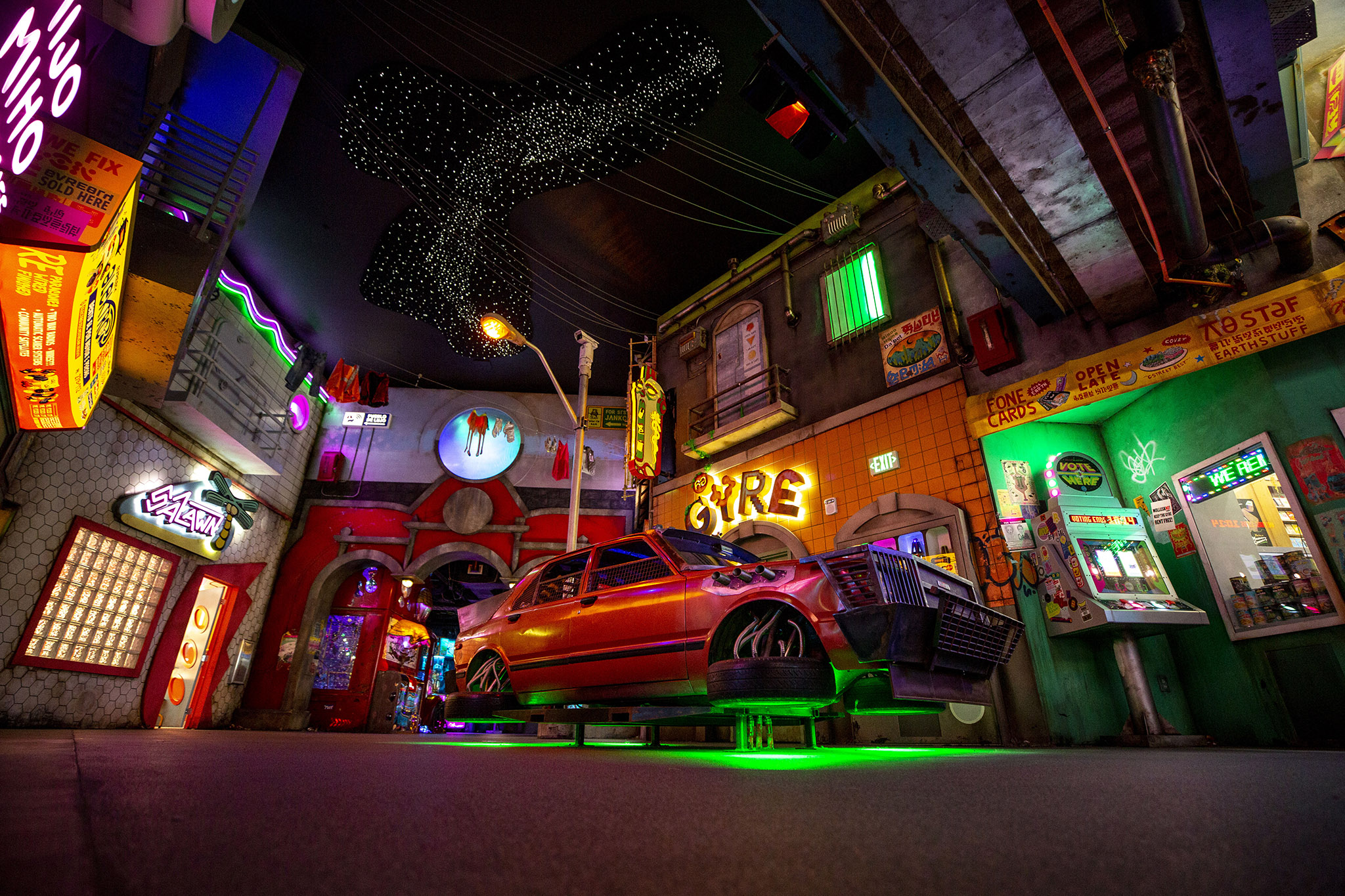 
In their own words:

Meow Wolf: Convergence Station is a massive, 90,000 square foot narrative art exhibition built around the concept of quantum travel. Guests will explore four floors and more than 70 immersive, interactive installations designed by more than 300 creatives, including more than 110 Colorado-based artists. There's also a gift shop and an in-world fast-casual restaurant called HELLOFOOD café, whose menu features items from local businesses like Raices Brewing Company. At night, Meow Wolf will host events and concerts out of the Perplexiplex, a 488-person immersive performance venue outfitted with interactive tech and projection equipment.

"Meow wolf's mission is to inspire creativity in people's lives," said Meow Wolf co-founder Sean Di Ianni. "This is really a major milestone for Meow Wolf. It's a huge milestone in our mission of inspiring creativity in people's lives, and I really think that this project and all of the others that we've created so far are proving out the power of the imagination to transform our words." 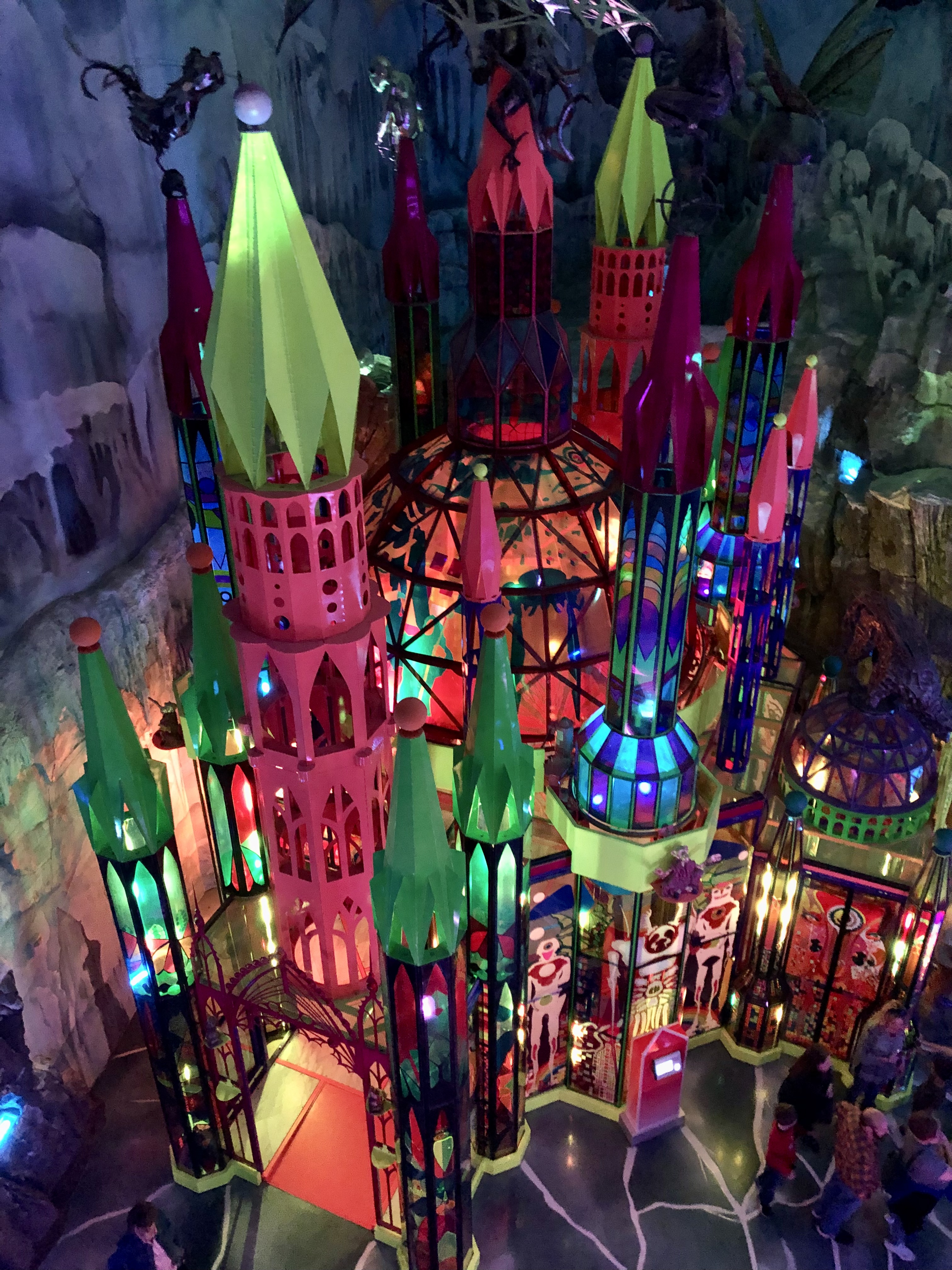 This structure is three stories tall. 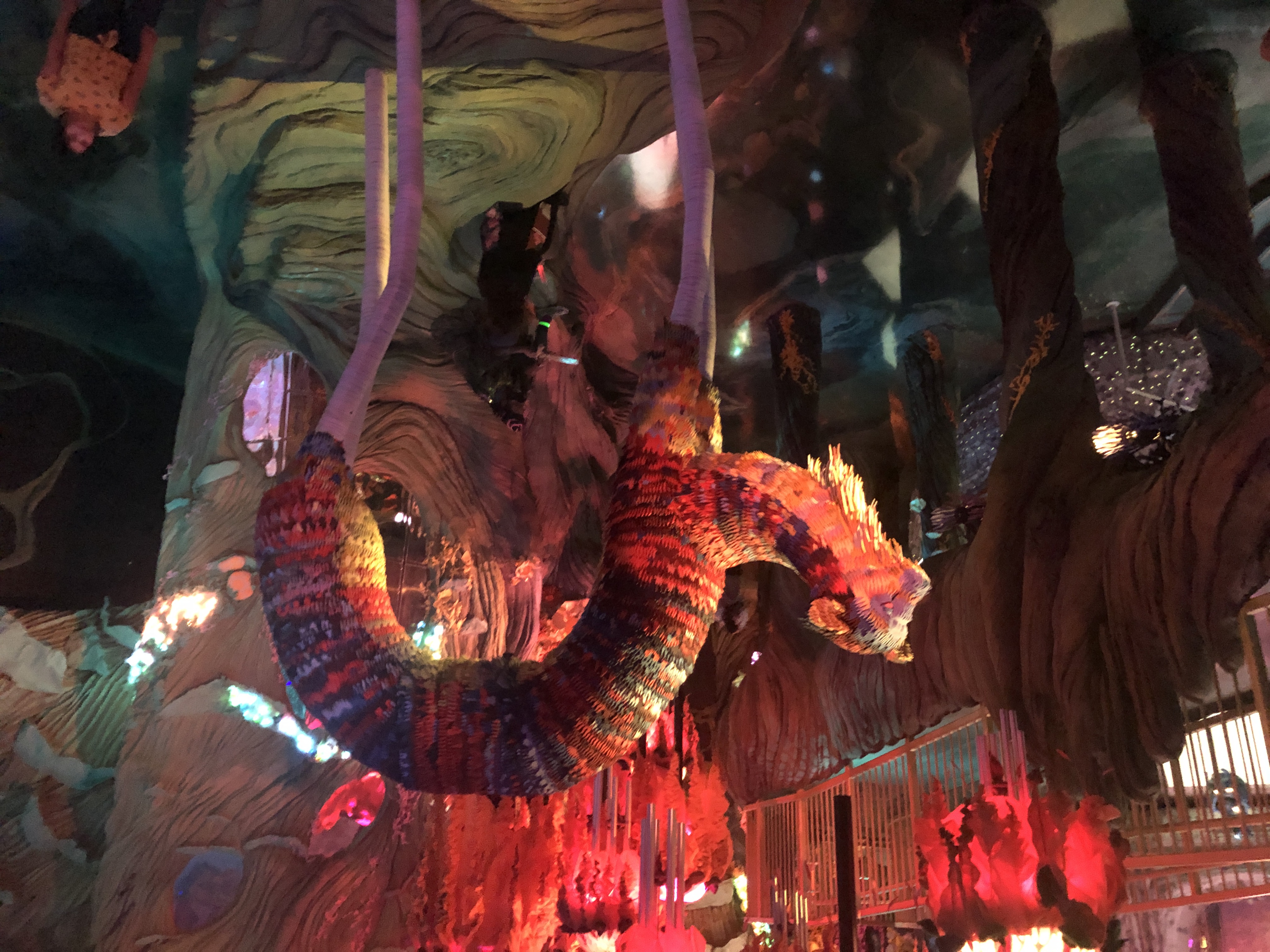 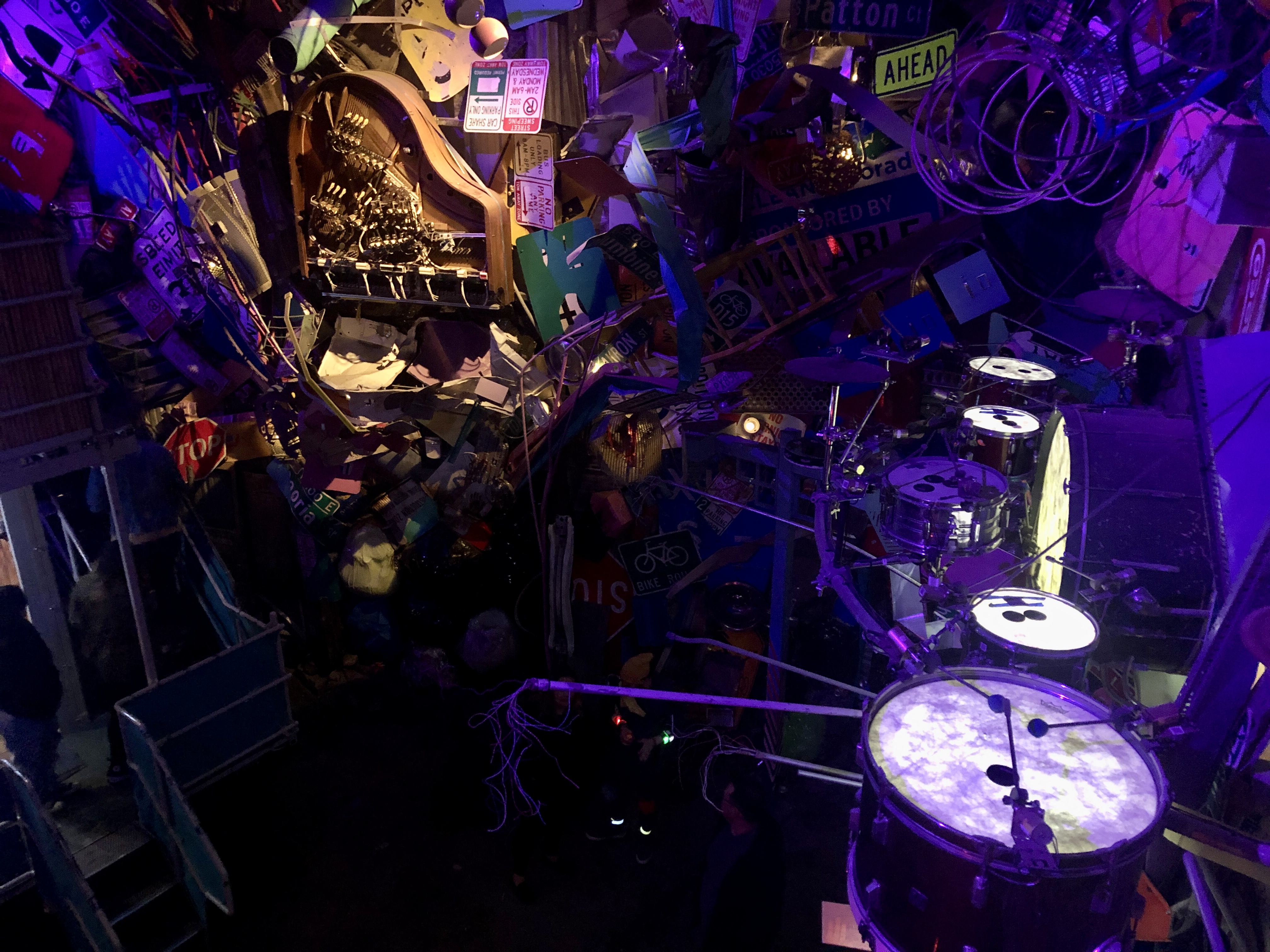 Looking down into the Drum Room.
All the music in this room was created mechanically, the drums on the right wall, the piano hung on the far wall and the tubular bells that are hanging on the ceiling, which you canmnot see. It was our favorite room, I think because it took pauses between the playing of the music and then it took breaths in the music itself and also because the sound itself was the result of a mallet hitting a drumhead or piano string or a metal tube. The sound throughout the rest of the exhibition was electronic and somewhat drone like.
On the left, you can just see the back of a boat where we climbed up to the bridge. The front half of the boat itself disappears into the wall. 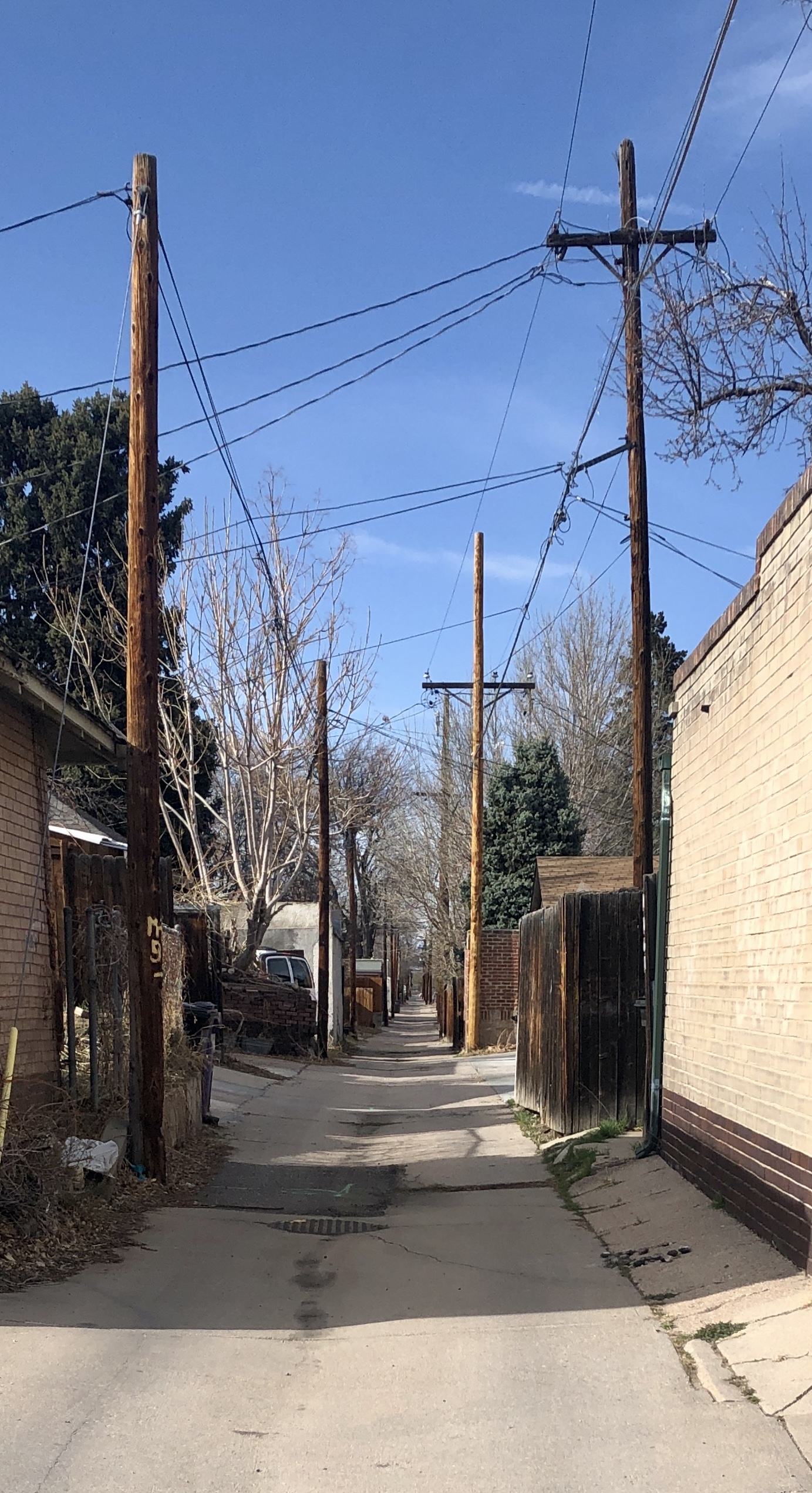 We took walks in the neighborhood and alleys were everywhere. They are an important architectual part of the neighborhood.What are we seeing that are not part of the streetscape. Well, power lines and garages. Dawn and I notice how pretty the houses are, and certainly not having to build garages with their doors into the front of the house and then put electric poles on the street and run cable into the house is also a plus. A minus might be the street people that now convene in the alleys and give them their bad reputation. Also, you have to teach your children to look out for cars as they exit. 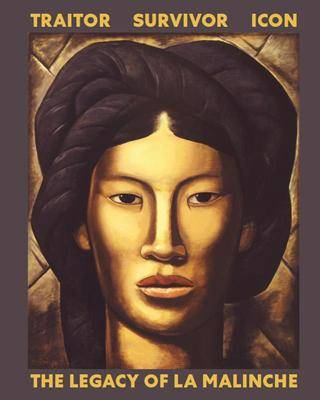 Stephen:
The thing that I learned here was that Cortez had help from Meso-Americans who were under the thumb of the Aztecs. I'm afraid it didn't work out for them very well. Malinche was a very powerful woman and thus she became an icon when people needed an inspiration. They made a lot of stuff up, but created beautiful strong images to carry their ideas through.

After seeing the exhibition, I went out to the front to wait for Dawn who was talking to a young women volunteer. I was stopped by an older, siver-haired volunteer who asked if my hat was leather. My first impression was that I might be escorted from the Museum. After a pause, I replied that it was microfiber.Then she asked if she could touch it. She said she was interested in buying one. At this moment I was rescued by Dawn's appearance and some hat talk about my hat having been left at the gate and hers being blown toward the jet we had just gotten off. 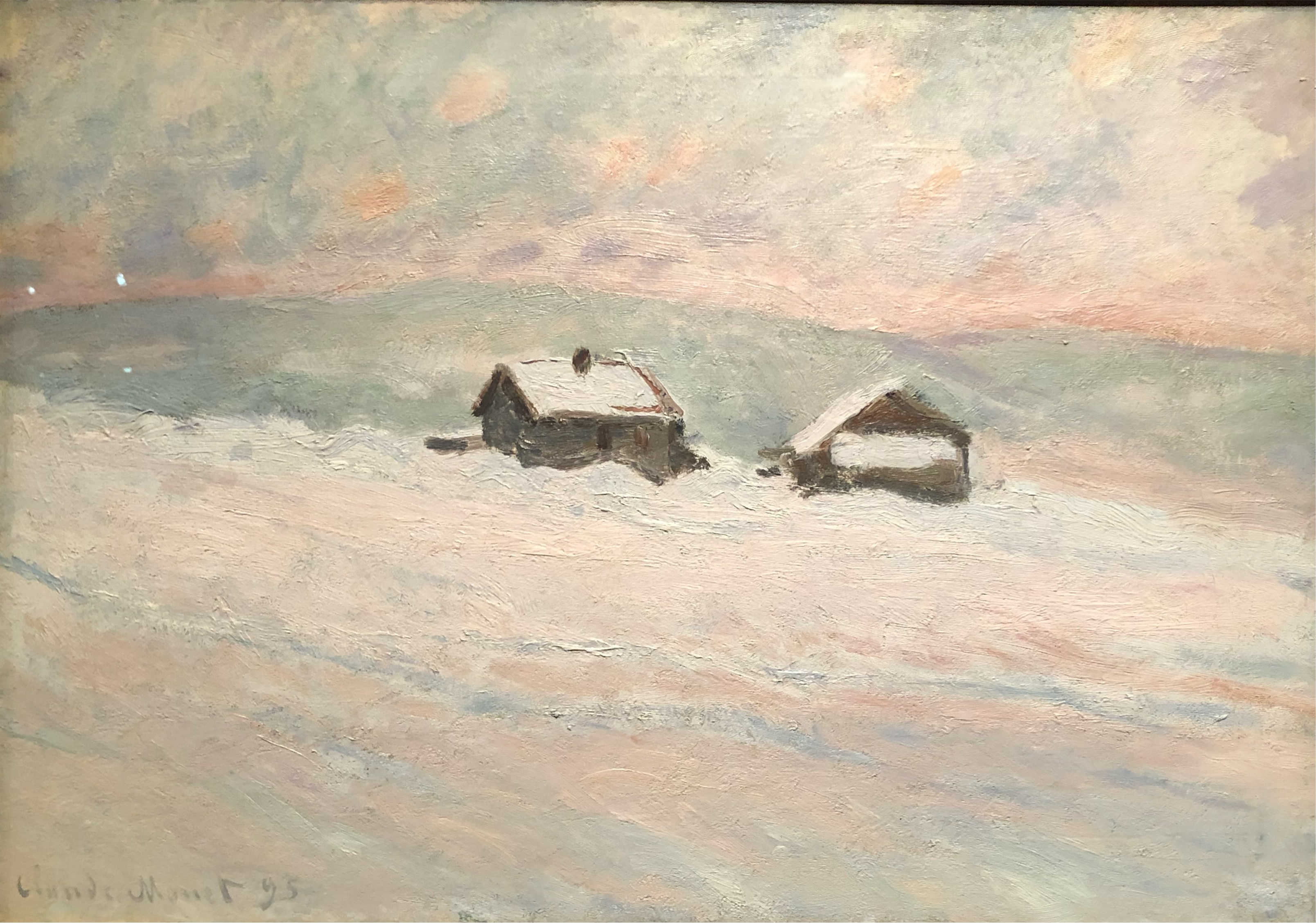 After a coffee, We wandered about the European Painting Gallery and this painting caught our attention. One doesn't think of the impressionists ever painting in cold weather. Not just cold but really cold.

Stephen:
I forgot to tell Jamie what time we were flying back to Boston, so he had to drop us a little early. It turned out to be an interesting afternoon. First, we got some help from a volunteer who just seem to hang around waiting for a person who looks lost to wander by. Then, there was no one in the security line that could hold five hundred people. We are working on our serentity as we go through security and it went well. She said I could hold my belt as I went through the machine and that allowed me to retain more of my dignity as I could get my belt on before I dealt with my bags and coats. 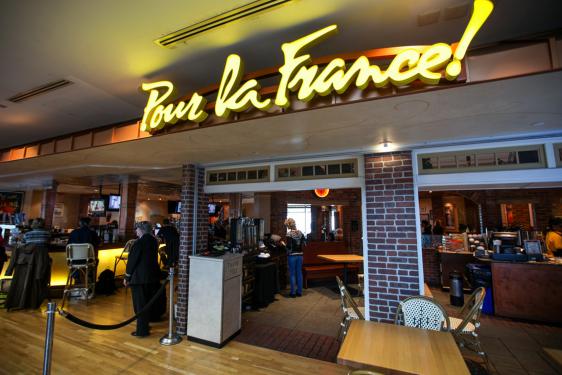 What came next was the best part of the day which was our lunch at "Pour La France". It was relaxed, the food was good, the beer was good. The waitress worked on her French with Dawn. She was coming from Haitian Creole, which made for interesting discussions. We ate leisurely and didn't worry about the time. By the time we got to the gate and visited the toilets boarding had started. At home, Dawn and I don't watch action so I took the opportunity to watch "No Time to Die". Lots of action and some nice parts. We flew fast and were over Boston before we knew it and we bumped down to a smooth landing and the cab driver took us home avoiding the Ted Williams Tunnel for reasons unsure, and the trip was almost over.

Stephen:
We are at the last station of this trip and I am taking the opportunity to do some wrap up of the whole trip.

During this trip we have been talking with various family members about aging. It is easy to see ourselves as diminished. Perhaps we are not as competent as we were or we cannot walk as far or as fast as we could at one time. This is a trap. We are trapped by the idea that we are less than we were, that we are failing some test. We are digging ourselves a hole from which we cannot move forward.

Can we see ourselves simply as who we are today without any comparison to who we were? Or allow ourselves to be aware of other things in ourselves that are better than they were before'? For myself, I am thinking about my listening skills and my patience. What I am doing here is trying to build myself a little hill here from which I can push off, like a pitcher's mound, into the future that I want. Rather than correcting or fixing the past, I want to be attracted by a future.

All this must be done with a little smile. One needs to recognize habitual thinking and just do something else. It also helps me to get away from myself to have a future that has a little more compassion. To see whatever situation that I am in a little more through the eyes of others. Not all the time, just a little more of the time, all with a sense of curiosity.

See You Next Time 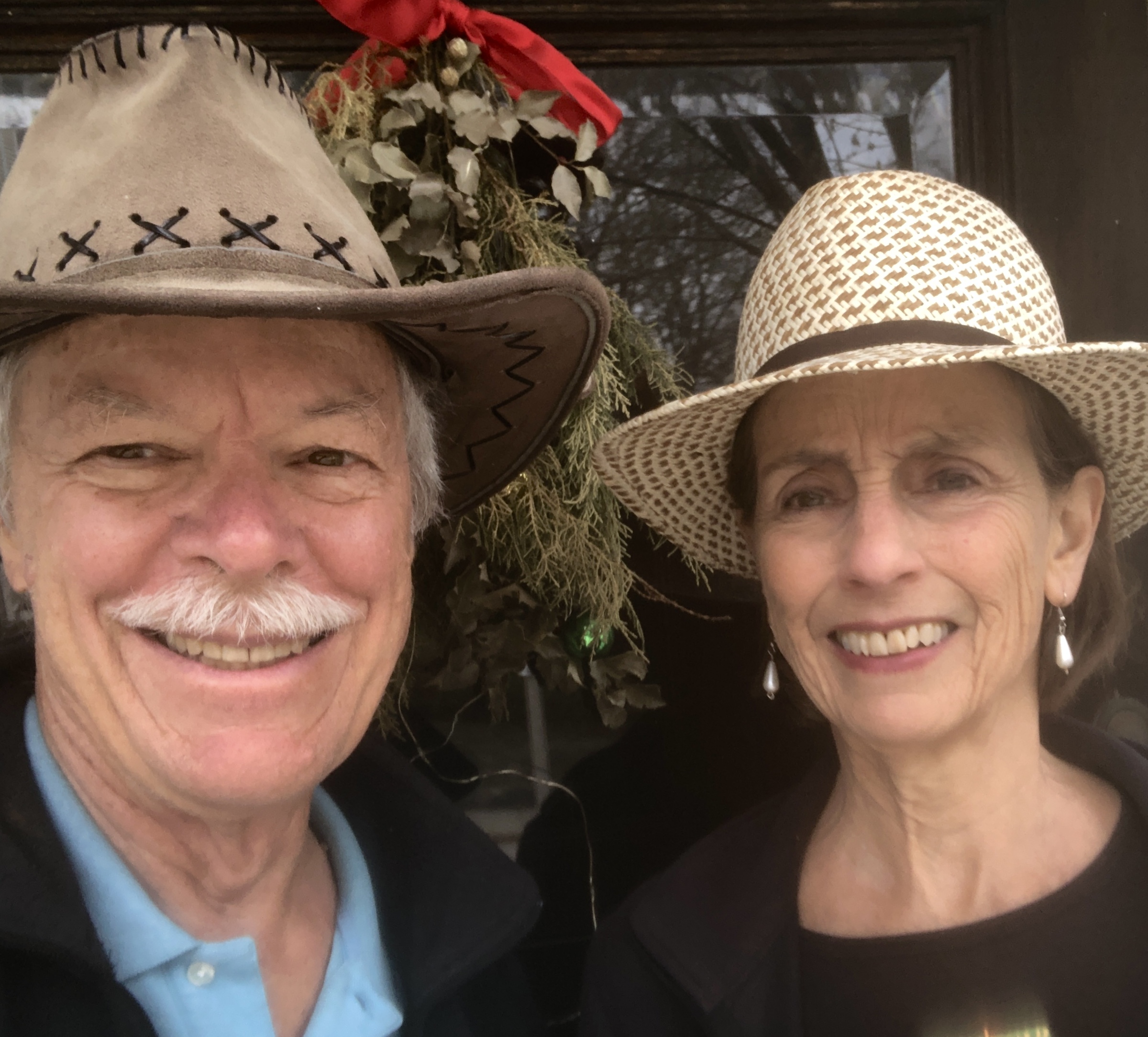 We are home now, at our front door with the Christmas decorations making a last stand. 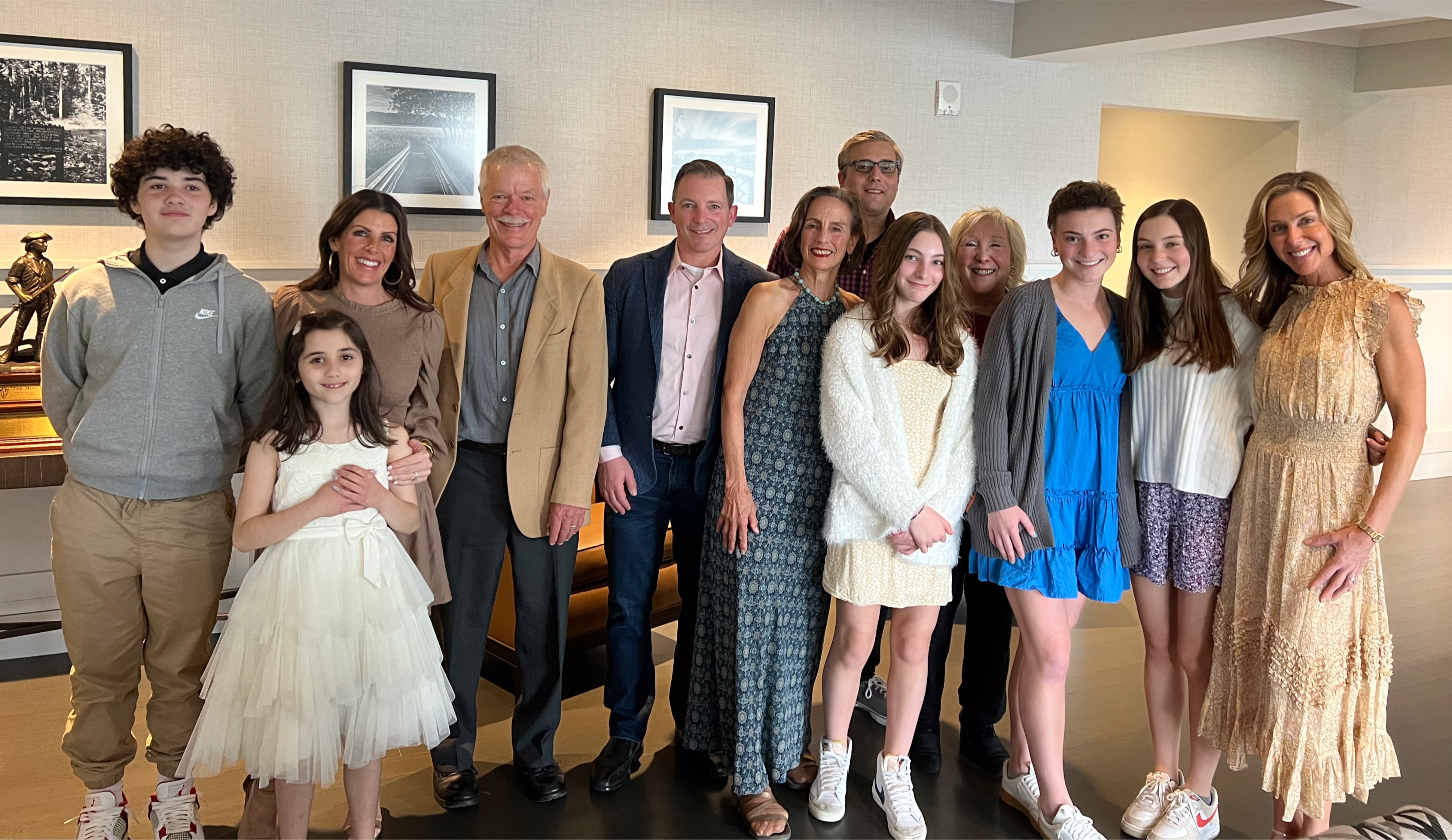 Dawn:
Back home to blooming forsythia, daffodils and tulips. We joined my son Adam and family, including Noelle's mom and her brother and his family for a wonderful Easter dinner. Especially given the chaos in the world, I have deep gratitude for the family and good fortune that is ours. May Easter, Passover, Ramadan or simply the miracle of springtime bring you hope and joy.

Stephen:
With our Easter dinner with Adam and family, this family trip and this travelogue are now finished. It has been a pleasure for us to write these few words.
Introduction     La Paz, Mexico     Todos Santos   With Andrew in St. George    With Jamie in Denver
Home Page of All Travelogues
(top)